Edit: if you’d like to hear some samples of his amazing singing do check out my twitter timeline on the right hand side towards the bottom of the page, i’ve been listening all day and posting a few videos there. It’s passion like the one he had and generosity towards the audience that makes opera such a profound experience with the right artist. ….

This was an original post from August, 10th , 2008… the first time i ever saw Hvoro live. What i didn’t share back then was that i also met him after the performance and he was lovely and charming and funny, an utter rock star 🙂 I hope i can find the photo he had somebody take of me and him. He’s now singing for the angels, but he will always have a very very special place in my heart. We’ll never stop missing you, Dima 😦 RIP

(Sadly the linked video is no longer available). More thoughts on him i found again : 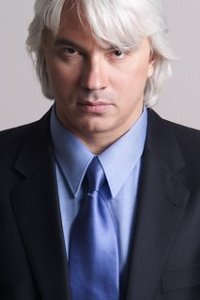 My festival started with a bang!! And probably started the way it should have ended, in absolute mind blowing, soul filling superlatives!

Translation: I experienced my first live “song evening”! And it was to be a memorable one, by the hand of Dmitri Hvorostovsky and in Russian no less! I say if you decide to do something new, do it properly!

Usher Hall was packed but one cannot say it was dressed for the evening… It looked more like a bombed place where big holes in the walls were hidden behind wooden panels. However, it is still a miracle they are able to hold concerts there at all considering that just a few days ago the place was totally uninhabitable.

In the middle of a song we also heard a loud bang, which could be either of – the first set of firework at this year’s Military tattoo or the workers dropping some boxes 3 floors down. Hvorostovsky reckoned the roof didn’t tremble too much during the evening 😉

Considering that my vocabulary in Russian is reduced to “vodka” , which I don’t like, and “spasiva” which probably sounds like everything else but thanks, I was quite apprehensive about enjoying the evening. So in order to prevent linguistic frustration I did my homework and read all possible translations of what would be the program of the night; some I did not find at all but I armed myself with trust in the wonderful performer which I had first heard in a ROH Traviata.

But I found that homework wasn’t necessary, because the artist translated with his voice, tone, gestures and gazes all you would ever need to know about Russian. It did give me however the freedom to ignore the program pages in my lap and tie my eyes to Dmitri. Some would think that “fun” is not the right word for describing an evening of Russian songs, but it is exactly what I experienced. They are often depicted as being an endless road to depression, but I found them much more intense and multifaceted than that. Yes there is winter cold, and sadness about lives’ struggle, there is hope of end and fear of betrayal but there is so much more and so much more powerful. And with such a passionate and consummate performer the songs grew to impressive dimensions. Even if you didn’t understand the word, you saw the sadness in his eyes, you heard the suffering in his tone, you saw the rage and frustration in his hand. And you heard sarcasm flow from his lips, just as you saw them curb in the most lender of smiles. 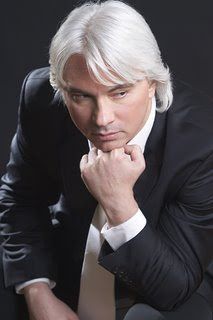 It is a true artist’s achievement to spellbind an audience of thousands in a foreign language with just your voice and a piano. Gradually people forgot about their programs and just listened to Dmitri tell us wonderful stories. There was a strong connection there, a dialogue of smiles, eyes and ears, which thankfully survived even the constant interruptions of applause after each song. It became more relaxed and familiar than such evening might be, but I don’t think it lost any of the intensity of the performance.

For more details on the program of the evening please see intermezzo! I felt that I had little to tell about the songs after this, but I decided that it gave me such an unforgettable experience and such pleasure that I had to say thanks once again to Dmitri and Ivari Ilja, who so sensitively and finely accompanied the songs with his piano.

I liked all songs, the sad ones, the melancholic ones, the furious ones and the merry ones, but above all the ironic ones. Watching Dmitri sing Tchaikosvky’s Pimpinella is just pure fun!!! 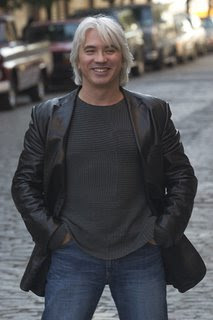 And he has the most amazing technique and endless breath, guaranteed to make the audience’s jaws drop to the floor where they stayed for pretty much of the evening 😉 My only slight disappointment was not hearing Goethe’s “GlucklicheFahrt” and “Uber alle Gipfeln ” in original, but Medtner’s music and Dmitri’s singing fully compensated for that.

Dmitri was also dressed for the part, all black silk and flowing lines around his shoulders and arms which made his movements even more gracious.

This was and evening of pure, refined Russian passion to die for!

And for me one of many many more song evening to follow, whatever the language.

Watch out for the repeat later this year at the Barbican and on the 15th on BBC for the broadcast of the evening in Edinburgh.

Here is a small taster of an older version of PYOTR ILYICH TCHAIKOVSKY “In the Midst of the Ball,” Op. 38, No. 3

Thanks for the video dokoleg1

For further reviews please see the Scotsman and the Herald

It’s an unusually balmy day in London, sun is shining between the clouds and we are promised 15C at lunchtime!

Makes one want to go and relax and reconnect with nature. And i came across this during my grumpy morning coffee and now i feel very relaxed, you should try it too 😀😍😃😂😂

Courtesy Scottish woods and the BBC:

Edit – click on the images to enlarge, i’ve figured out how to do it!

Sorry everyone, i know this place has been somewhat lonely lately. Still working through stuff and things just keep dropping on the pile accumulating… But more about that sometimes when it won’t be just an unreadable windge-fest.

On to more seasonal things.. or not, as you will see shortly 🙂 The lovely Herba and Poe have been setting monthly creative themes, which have been much fun to read and see so far. I got in late for the Oktoberfest one with a theme inspired meal of Schnitzel and potato salad but this was a no-brainer!

And you’re probably asking yourself: where??? Well, on the top of the mountains, where else! Of course, there is a bit of fog so you can’t quite see it well, so here’s some more: 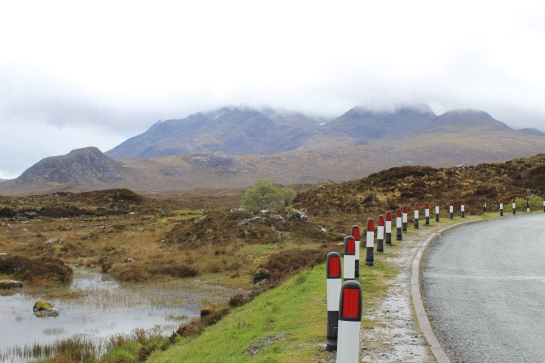 There it is, between the peeks…

Wet did not tarnish the beauty, at least i didn’t think it did….

Since i am not sure you can see in any way when these were taken.. it was 2nd of June 2015…. yes, snow… in summer 🙂 Quite unusual even for the highlands and the isles, but it was 8 degrees C and snowing that weekend and the temperatures stayed that low all week.

It had the major advantage or saving us from the highland monster – the midges- and giving us dazzlingly fresh air to inhale up and down these mountains. In spite of appearances it was not really mucky, just wet and pretty slippery. The ground is mossy and it absorbs water like a sponge. The season had been however unusually wet so there were waterfalls and ponds everywhere and you had to watch your step if you didn’t want to end up with wet ankles.

Oh and it makes for perfect weather for a wee dram 🙂

For those still doubtful here are some wobbly speed snaps from the bus on the way around Skye 🙂 Fresh snow, our guide had been skiing there that very weekend.

But it wasn’t all grey, the very next day i was on a boat at breathtaking winds and mostly clear skies (dolphin spotting trip).

The Cuillins in the distance and parts of the Black isle closer by.

It was Burn’s night the other day and i got email from my usual restaurants in Edinburgh with evening menu of cullen skink, haggis, cranachen and i thought of snow and Inverness and Skye and missed Scotland terribly… and had the taste of Singleton of Glen Ord in my mouth. Now i wish i had found a way to squeeze a bottle in my backpack last summer…

I just want to close my eyes and be back in the highlands, with the patches of snow in the summer 🙂

and back to this place where i had the most amazing lunch bap with fresh crab, salmon and Scottish langoustines! It’s heaven on the palate.

Urquhart castle on Loch Ness in the rain

Urquhart castle on Loch Ness in the rain

I feel like i have travelled through time and history. … my mind is full of Stewarts, clans, standing stones and grave stones, legends and life stories,  music, plaids, broadswords, castles and struggles…
I’ve been at Culloden today and it’s a site of so much sorrow.. not only for the deaths that happened here but also for the consequences which have rippled through time. I’ve not been on a battle field before. ..
And yet you are always surrounded by so much beauty…

Badly taken with a tired hand on mobile phone..
Tomorrow the long two part journey home begins via Edinburgh again.
I feel incredibly sad for having to leave. …

And i wish i was still in Scotland, which is where the best view of the eclipse was today on a truly stunning morning:

and then the universe put on the show 🙂

Can’t wait to be back in Scotland in June!

And for geeks like me who love eclipses and all things universe, tonight at 9pm on BBC TWO in ep 3 of Stargazing ‘Brian Cox and Dara O Briain host their final night of stargazing from Jodrell Bank Observatory where, following the day’s extraordinary events, they have exclusive images from the solar eclipse. Brian also reveals the latest discoveries and solar secrets of our nearest star’. Click on the photo for link to the program on Iplayer:

Brian and Dara (the professor and the comedian)

PS and in other news it’s been an absolute hell of slavery this week, but at least it is coming to an end (to be continued on Monday of course…) But, i just needed a little pick me up this morning, so i finally decided to change my desktop image to this: 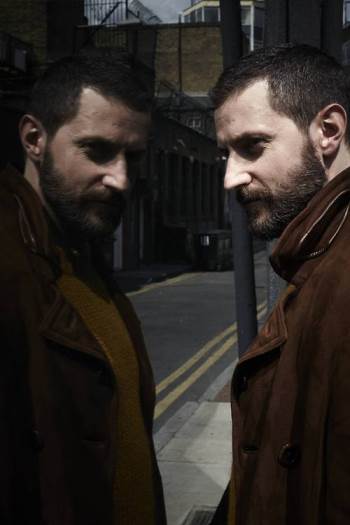 because there are many beautiful things in the universe 😉

Follow Opera is Magic on WordPress.com
Join 181 other followers