Tiny update, in case anyone doubted our ‘engagement’ in the proceedings 😉 Can you hear the noise coming from behind , left hand side of the car as it stopped (they announced who was getting out of each car), well there you go, we did give it a decent, loud go 🙂 (utube from Valentina)

Just a quickie before i go on, promise i’ll reply to all previous comments tomorrow but we’ll get this out of the way first and then go back and read everything and look at everything 🙂 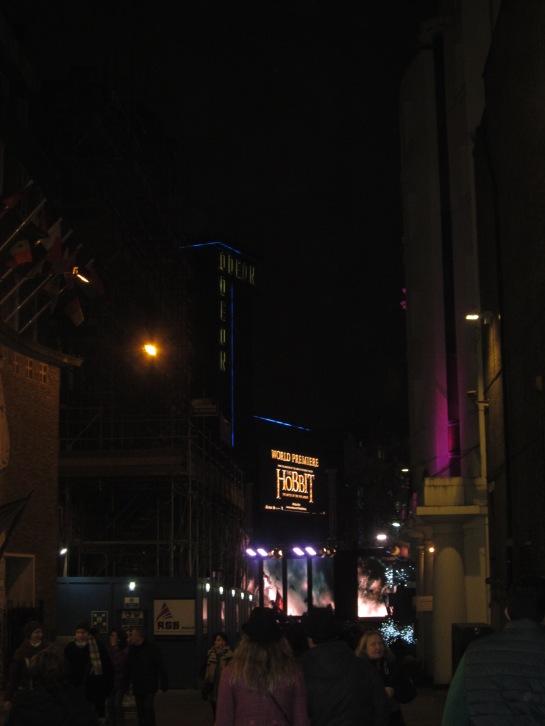 Let’s get some organisational stuff out of the way, WB not at its best, in spite of numbered bands we were kept on the street standing from 11am to 3,30 pm. With no indication when we would be getting inside the pens. And it was all to do with the fact the the rigging and carpeting took ages (too few staff!). The carpet laying finished at 5pm!! and during the last hour of it, the truck of the 4/5 men working on it was parked right in front of us blocking the view of the screens. Which screens would have been fabulous to see had they put anything else on them other than showing 4 trailers in repeat. It did not occur to them to show the interviews on the screen so that side of the carpet could see it, or show who was arriving or anything else, same trailers for about 6h. Which is why i have very few pics of those as we’ve seen them all before. 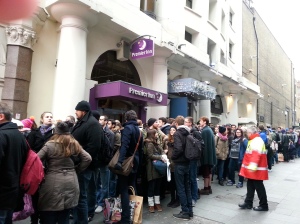 We could hear the interviews and that was about it. They distributed people alongside all corners, with the first 500 prioritised in front of press along the straight line and us who were next being pointed to the corners where the cars arrived and dropped people off and then left. Unfortunately it was a bit of bad karma as that ended up being the total dead spot of the entire place, cars parked at that corner but left through there too so people were getting out of cars and naturally walking away from them and us, in spite of calls. So much on the org stuff which unfortunately did end up impacting the experience. 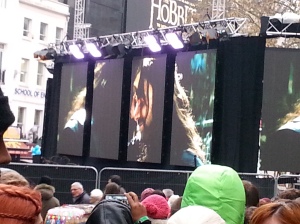 screens view from street with trailers 🙂

Time passed surprisingly fast and we had a good time in the cue as we have yesterday chatting away and getting excited 🙂 It got a bit cold but not totally unbearably so. Once we were in however our corner was dreadfully drafty, which at that time was a bit hard on the bones. But we were there and the excitement overrides such things as cold and wind 😉

Now to the hard bit, i even doubted if to write this post at all, but i could hardly leave everything at Part 1 and even if i did consider deleting yesterdays, that doesn’t chime well either. I started this quite openly and i’ve decided to finish like that too. I’m afraid i have to disappoint on all points that i am well aware i created expectations about yesterday. I didn’t see OOA at all, not even a shadow. The car came, we made quite a racket and i can be very loud if i choose to and i did 😉 I did my bit with quite a lot of conviction 😀 But it just wasn’t to be,out he came, off he went and that was that.

A bit of a shock i have to admit, mostly because silly me, i didn’t even for a second consider the possibility that with good organisation and a good cue, decent numbers and pens, a virtually small place and tight enclosing, me being quite tall and being only 2nd row i wouldn’t see him at all. I did take everything into account, speed, seeing only from a distance if there were people on the opposite side and such, just didn’t occur to me to consider the zero option. Upsy. I felt a bit understandably lost. My mind went: no? really? that can’t be, surely! But it was. 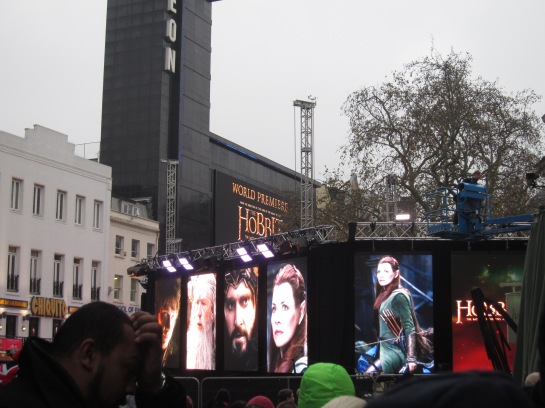 I had taken my Crucible poster with me just in case, but i will now get it framed, done waiting 😉 I’ve really wanted to be able to look at it and i want it on my wall, right now! Serves me right for hesitating too long during the run and not deciding if i wanted a signature, then deciding i did want one but then the crowds were too much to try and then thinking oh maybe now. It stays ‘virgin’ and will go on my wall both as a reminder of the incredible, life changing summer/run of Crucible, as well as a reminder to go for what i want and not dance around it stupidly 😉

from the pen, still carpeting!

Back to the green carpet.. You don’t get much time to recover of course as cars move on and people come and go, ours continuing to be a dead end, or the dark corner which nearly no one dared to approach. But then things suddenly changed with the arrival of Evangeline Lilly who came, pretty and cheerful and in the excitement lost one of her earrings, which somebody then helped retrieve and after she took pictures and chatted to everyone around for quite a while she tried to get back on. Due to earring trouble we had her there for quite a while longer 🙂 Lovely 🙂

Evangeline smiling, joking and trying to get her earring back on, to the left you see the cars exiting and the people on the street past the enclosure

Orlando Bloom obviously knew the layout of the place and its corners too as he got lured pretty quickly our way with a few prompts, sadly i hadn’t yet quite gotten the hang of camera and energy back and i ended up watching and forgot to click. There were selfies, just like with Evangeline, smiles, more pics and a head of hair on that man.. ‘ggg’ who thought of that, he should fire them 🙂 as otherwise like Evangeline they were a picture of elegance! Nice chap indeed 🙂

And lookie here who came next!!! You’re getting all 3 shots of him i have because he spent a whole load of time with us and these are of my few pics, the ones which turned out pretty ok 🙂 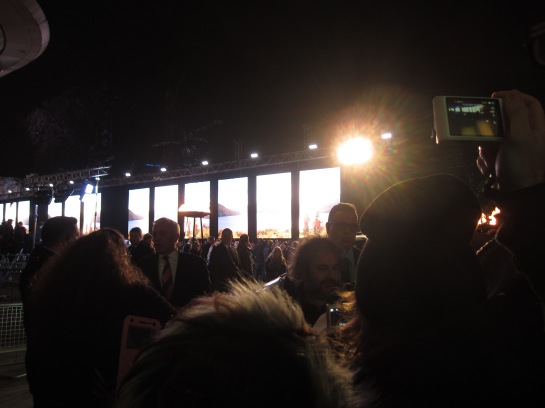 I totally understand what people have been saying about Peter Jackson, he is indeed the sweetest man! he not only signed all requests, took pictures, but actually talked to everyone and asked us how we were, if we were holding up ok, had we been waiting long? He hoped we weren’t too cold and agreed we were lucky that it hadn’t rained and all. He hoped we did enjoy ourselves and more that i didn’t hear well because he is soft spoken.

More PJ smiling and talking to us

You got a bit of a sense of him ‘getting’ the fans and understanding why in some parts the movies are for the fans 🙂 It was incredibly nice to have that very basic and down to earth interaction. Ok, i’ll admit i chocked up right then and there when he actually managed to have a conversation and engage with people about our aching feet and the cold 🙂 Silly i know, but it is Peter Jackson! we are talking about here 🙂 And it was nice of him i thought 🙂

There was this Norwegian boy who dashed towards me through the people next to me, going ‘please please please i’ve come all the way from Norway, please sign  my book’. He couldn’t quite reach so i stepped down to drag him by the sleeve a bit to my place and went ‘please, here too’ 🙂 And sure enough he came all the way back from the corner along our line again signing and i snuck in one more pic:-) Ahhh you should have seen the beaming face of that young chap! 🙂

And that wasn’t all, we got one more! Another local, again probably familiar with how tricky this place is and actually how not really very well suited for easy carpet walking. He didn’t even get out the car close to us but came all the way. Any idea who this is????

Not my best shot, but people got a bit excited around 😉 so my other ones are obstructed by hands and phones. But never miiiiind! This one is as he was going back, he came to the last man and walked along all of us, signing, smiling. Nice and elegant, isn’t he? He was exactly as i thought he may be and of course he was the last one i expected to see given the location and that by now everyone else had come and we were clearly nearing the end, plus their time on the carpet was running out. He took his time and the best thing was this: Right in front of me was a girl who turned 16 this very day and she told him about it and asked him to please sign for her. Which is when i tried to take a snap as i had him right in front of me, but he suddenly hunched down and there he was scribbling away for an awwwfully long time! After he had walked away she showed me and her friend a half page of notebook with Benedict’s extensive dedication signed very clearly and with nice handwriting and all letters showing. That was quite some dedication 🙂 Needless to say one very happy girl and isn’t this a brilliant thing to have for your 16th birthday? 😀 Well done Mr Cumberbatch, very gracious indeed. Everyone else got their things signed if they had any they wanted signed.

We stayed for a little while longer and listened to the cast interviews, but as there were no projections it was sound only and then the evening ended. Looong day but quite a few good smiles of happy fans around us.

Please don’t take any of the above as criticism (you know what i mean). Well, the organisational stuff yes, because i know audience can be dealt with more sensibly and just more enjoyably. It all started well and security was good, but some things like the screens were badly underused. Water under the bridge…

Anything else is a matter of location, organisation, luck that lasted us for a very long time and just some poor luck at the end that nobody can help. We had a lovely weekend and we were lucky none of us were alone on the day in the end (good to have each other), we were lucky with the weather (it could have been sososo much worse!), we had some great fun in the cue on both days, we saw some really nice people and those smiles of happy fans around me are just the best. I am glad i did the whole thing and i don’t feel nearly half as bad physically or achy as i thought i would! I can still rock short nights and long days and standing and i can still turn up the volume and shout my heart out 🙂 if something drives me to it 😉

I’ll hopefully get through the avalanche of photos and tweets and posts tomorrow and get to see what you guys saw on the live broadcast.

And last, but not at all least, thanks to everyone who took amazing photos! Especially to someone, she knows who she is 😉 who took a most aaamazing shot in conditions which where were 100% against us 🙂

Follow Opera is Magic on WordPress.com
Join 179 other subscribers