‘Ahead of the tenor’s performance at the Last Night of the BBC Proms, we pick some of our favourite YouTube clips. 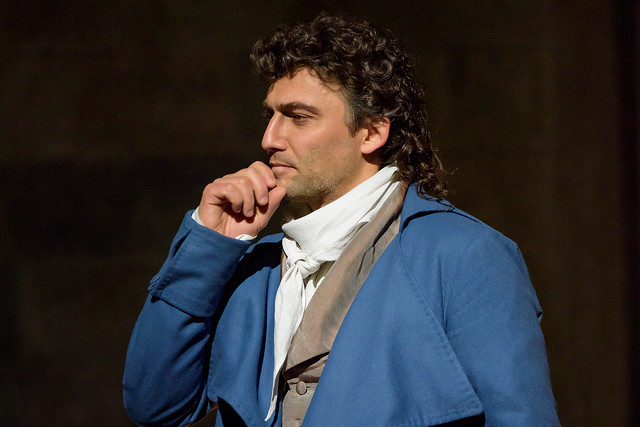 Acclaimed German tenor Jonas Kaufmann will take to the stage of the Royal Albert Hallthis Saturday for the grand finale of the Proms. Last Night of the Proms, a celebrated concert that marks the close of the two-month classical music festival, will be broadcast live on BBC Two (first half from 7.15pm) and BBC One (second half from 9pm).

Jonas will join pianist Benjamin Grosvenor, soprano Danielle de Niese and the BBC Symphony Orchestra and Chorus, conducted by Marin Alsop. They will perform a programme that ranges from world premieres to the National Anthem. View the full programme.

Jonas will sing Thomas Arne’s ‘Rule, Britannia!’ (the first German to do so at the Last Night of the Proms) as well as operatic arias ‘Nessun Dorma’ from Turandot, ‘Recondita armonia’ from Tosca and ‘Donna non vidi mai’ from Manon Lescaut.

For a taster of Saturday’s performance, watch Jonas perform ‘Donna non vidi mai’ inJonathan Kent’s production of Manon Lescaut. The production had its world premiere in June 2014, and was subsequently screened live in cinemas across the world:

Jonas has just released a new album – Nessun Dorma: The Puccini Album. The recording, which includes excerpts from all of Puccini’s operas (except the all-femaleSuor Angelica), was recorded with Royal Opera Music Director Antonio Pappano, the Orchestra of the Royal Opera House and choir of the Accademia Nazionale Di Santa Cecilia.

Jonas next performs at Covent Garden as the lovestruck Don José, opposite Anita Rachvelishvili‘s fiery femme fatale in Francesca Zambello’s Royal Opera production ofCarmen. To whet your appetite, watch an extract of his performance at Covent Garden from 2006:

Jonas made his Royal Opera debut in 2004 as Ruggero in La rondine, and has since sung roles including Alfredo in La traviata, Cavaradossi in Tosca, Don Carlo, and Maurizio in Adriana Lecouvreur. In April 2014, he performed a hugely successful main-stage recital of Winterreise, Schubert’s lieder cycle that he has also recorded with Sony:

Day tickets are released at 10am each morning for personal callers , and returns may become available.