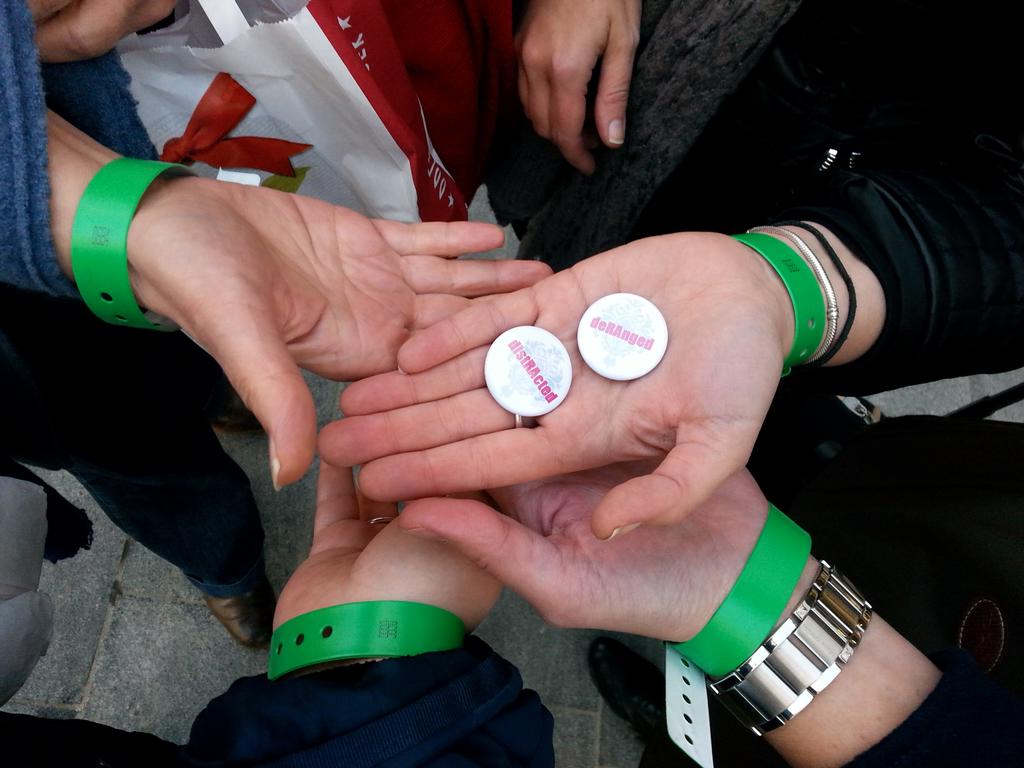 I will probably regret being up at this time of the night before the premiere tomorrow, but not feeling quite sleepy though feeling really tired. I didn’t want to write about it before we actually had the wristbands and there was always a chance we wouldn’t be able to get them. We did cue up for 2 hours this morning and managed to get them and were promised orderly access tomorrow with them (they are numbered), so we wouldn’t have to be there in the wee hours of the morning. We will see… But the main thing, access itself, is guaranteed and that is all we wanted 🙂 We have no idea where we will be tomorrow and if we will manage to see the OOA, but we did all we could do from our side, all we now need is just a little bit of luck.

Leicester Square is a bit of a mess at the moment, the 2 cinemas for the premiere are alongside two sides of the Sq, the Empire where the public with premiere tickets will be and the Odeon Leicester Sq where the stars will come. The entire middle part of it is also currently occupied by a massive Xmas market with 2 storey stands/houses and carousels and stuff the near hight of the buildings! We saw it Sat in all it’s glory, lit up and making a racket.. we hope it may take the day off tomorrow but not so sure… It will make things .. interesting and it makes the space for the premiere even more tight, one side of the sq will surely be occupied by the press and the rest by what WB so ‘nicely’ called ‘pens’, which is why i called ourselves equally nicely 😀 #hensinpens 😉 But i’ll switch to the less cheeky #OneLasttime tomorrow if i remember. Was so excited today i didn’t remember that and all i could come up with was the other 🙂

We made some lovely friends in the cue, not Rich fans but nice nevertheless and shared our homemade sandwiches 🙂 It’s a drafty place and temperatures are set to drop to max 7C tomorrow so we’ll camp and wrap up as best we can and hope that the warmth will come from within.

We were crazy exited and i felt really giddy like i don’t even remember for years now, but it’s been a lovely thing to put faces to people i’ve been talking to for the last few months, we’ve had quite a few laughs 😉 I wish more people could be here to be honest and i’ll try and share as much of the experience as i am capable of reproducing with as many of you.

Feeling pretty knackered by the whole emotional storm going on and by the intense day, you’d be maybe surprised at what we did next. But before we got there, look who we bumped into on our way out of the sq!!

I was so excited to bump into this!!! Well, we all were and we did spend a big part of today reliving our memories of the Crucible in the summer (pretty bummed Yael Farber did not win the Evening Standard award for best director.. sigh 😦 ) And looking forward to seeing it again soon! I do wonder if i will survive the overload this week …

After some much needed .. pizza and coffee 😉 we went to Tate Modern to see a recently opened exhibition on Conflict Time Photography

Don McCullin ‘i  am told by someone who knows’ is one of the most famous and best conflict photographers of our time. The exhibition is quite extraordinary as it presents images of conflict not location based, but rather from the perspective they have on the conflict itself, captured at the exact moment, days after, weeks after, months and years after. It’s very creatively presented with very different displays, with cold war as well as actual armed conflict, with pictures of survivors, of landscapes and debris, of humans and buildings and nature all impacted by conflict. There is a frightening array of conflict from the last 100 years mostly and although places and people matter very much, set aside to each other they become a sobering flow of repeating stories, suffering, survival and death, recovery and then again conflict… It  blurs ideologies, politics, religion, geography and presents the impact, the consequences.

There are some striking photographs  which, were you not to know the subject of the photo, could be called stunningly beautiful… There are many techniques and ways of presenting the reality of war, including a very touching one of just exposing photosensitive paper to the light in the conflict zone which turns it from deepest black to a flash of red to white. There is hope in some images looking back 30-60 years at conflict times, especially in the way nature seems to overgrow and end up hiding wounds inflicted upon it, but there is a a very unsettling feeling of history repeating itself again and again and again in a never-ending cycle… It’s a thought out exhibition, which does not set out to shock you visually  or make you queasy, it’s not a wrap of the News, it is much more thoughtful than that. Rather than shocking you in an instant and then you walk away, it takes you on a journey. It makes you think, not emotionally, but soberingly, quietly, profoundly.

It was really busy and i can only recommended it to anyone visiting London, i do hope they take schools to see it, i wish they would take politicians of all kinds to see it…  You can’t leave without asking yourself: why do we never ever learn? how much conflict can humanity and nature really recover from and keep going?

I thought a very good way to spend the afternoon, we all did.

We ended the evening with some light drinks and some not so light but nice fish and chips and an extended talk about Richard Armitage, the roles, the acting, the talents, the man, the clothes, the nose (we love it so!), how we got ‘into him’ and what we like most and much more more. If your ears were burning bright and hot, sorry it was us talking about you 😉 A very positive bottom line emerged, not to worry 😉

I am feeling really Zen at the moment, as calm as i’ve not been over the last couple of weeks! Xmas approaching always stresses me out completely! Shopping lists, orders, pick ups, exchanges, the Visa card groaning etc… Work was hell with everything and anything that could go wrong going wrong, from reports with errors and many meetings. I crossed a certain age threshold and i’ve been worrying about it for months, questioning everything and anything and being utterly surprised when the next day life just continued as before! And feeling utterly ridiculous for worrying myself sick over it and what it would mean. Doesn’t mean a thing thankfully and i don’t suddenly feel burdened by my age, just as i never did before. Yes, there will be days when i know i am past 30 :-p and there are still many days where i don’t feel older than 25! So for now i decided to just carry on as usual.

At one point i was so distracted by all things that i went to buy the Empire magazine (quite a few interesting articles and a phrase about a certain someone giving the performance of the trilogy!) and ended up with the cover of the elves instead of the cover with the dwarves! And on the next day when i returned to the news-stand they had run out of that particular cover!!! 😀

I managed at almost last minute due to seats selling out to grab myself tickets for the Crucible on both the 4th and the 7th.. how on earth i’ll process the RA overload this week i have no clue, i wish i was a hard disk! To absorb it all in real time and then process it off the disk in my own time! I also wish it wasn’t overlapping with the Hobbit so maybe they could do a special screening for the cast of the Crucible and have a mini red carpet of sorts if you will 😉 Not gonna happen unfortunately..

The week then ended on a total high, if you see the previous post there is something about the ‘love spread’ that reached me in the surprising and wonderful form of a Lucas North locket!!!! Talk about things taking a turn for the better! 🙂 (Thank you Oscura and everyone!). I even managed to squeeze an opera in this weekend, which is just the way i want it (more on the balance between this life long passion and theatre and RA and stuff some other time, as that has been causing another head ache recently but i’ve come to a resolution, if not to a new way of managing my schedule 😉 but i’m determined to make it work!)

And on top of all that the weekend was looming ever bigger over my head, with me feeling that well, at least this proves i am not old and don’t feel old since i’m doing stuff i’ve never done before (even if my friends think i’m a nut for doing a premiere in a square ;-)) Then suddenly the weekend was here and it started with feeling edgy and restless and then finally everything fell into place when people arrived 🙂 We just carried on in person as we have been online and i can’t say enough how normal and nice and fun it feels! I am so glad i decided to do this and we are doing it together 🙂 We’re,I’m having an enormous amount of fun! And i am so glad we met and are doing this together!

I swore to myself – as i was thinking of all the things that i will DEFINITELY NOT do on top of just being there, which felt embarrassing and crazy enough – that i would not be shouting Richard, Richard to attract attention on the day, no way.

Well, i am no longer at all embarrassed about being there and doing this, everyone was already having fun in the cue today and everyone was happy to be there for a once in a lifetime opportunity. I’m allowed to take the day off my serious day job and do something that is just harmless fun 🙂 So, the bets are off for tomorrow as i don’t plan to stand in the cold for a considerable amount of hours and not say hi or wave or try to see RA from closer up, that is after all the reason we are there tomorrow, to try and get a glimpse of the wonderful actor who plays an incredible Thorin! That is the whole point of a ‘green’ carpet (more #hensinpens theme there again ;-))

So, hope you have sweet dreams Mr A, do dress up nicely, we’re looking forward to seeing you tomorrow 🙂

Love the above pic! haven’t even begun to process the avalanche of photos and articles during the last week  but i did notice this 🙂

Will try to keep people in the loop tomorrow, but i have to keep my phone going since it’s the only local one and you never know when you need it so it may not be as frequent as i wish. Will snap away though and share a few so you get a feel for what it looks and feels like and then hopefully more to come later. Do watch the live stream if you can, here